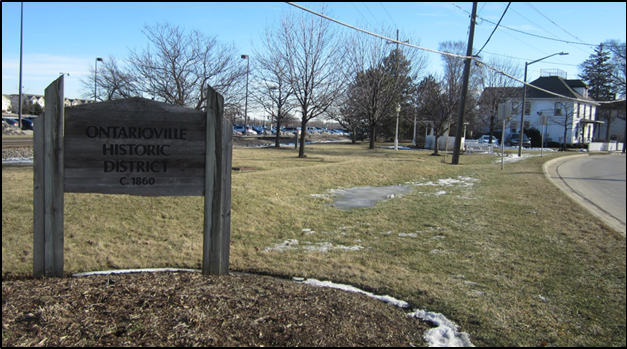 In 1846 it was called Ringgold. In 1873, Ontario. And awhile later, Ontarioville. It was the predecessor to Hanover Park. Although just a small portion of the original settlement remains today, the community played a large part in the development of the entire area.

During its heyday, Ontarioville was a stage coach stop and then a railroad stop for the Chicago and Pacific Railroad Company. It was a community of farmers, Germans and English, who provided dairy and agricultural products for people living between Chicago and Elgin. There were seven large farms, a grain elevator, two general stores and two taverns, a church, and an elementary school. About 200 persons inhabited Ontarioville. A dance hall became the center of Saturday night activity, and residents spent Sunday afternoons picnicking in the park.

In the 1930s, the US 20 bypass was rerouted around Ontarioville north of the railroad tracks, signaling the end of Ontarioville as a center of daily business activity. The Great Depression aggravated economic problems, and the post office was moved to Bartlett. Post World War II home construction boomed in the late 1940’s and 1950’s north of Lake Street in Cook County, bypassing the DuPage County portion of Ontarioville. To avoid being annexed to other nearby municipalities, the residents of these new subdivisions voted to incorporate their own village in 1958 and called it Hanover Park. The commuter train depot was damaged by fire in 1971 and was subsequently reconstructed at a new location. Its name was changed from Ontarioville to Hanover Park, making the transition from a rural crossroads to a suburb almost complete.

Finally, in April, 1982 the remaining unincorporated area of Ontarioville was annexed to the Village of Hanover Park in order to be provided contemporary municipal services. Gone was the era of Ontarioville as an independent community and name on the map of metropolitan Chicago. But, its legacy is not forgotten.

In 1977 the Hanover Board of Trustees adopted a Comprehensive Plan for the Village which recommends the designation of Ontarioville as a “historical area”. In 1980 more specific policies were adopted for the Hanover Park Central Core, including the following

“The original Ontarioville Center along Ontarioville Road between the railroad and Church Street shall be nominated for the National Register of Historic Places. Its streetscape shall be improved and its buildings and sites shall be restored to better serve the uses that are located there or their compatible successors.”