On Veterans Day in 2011, the Village of Hanover Park dedicated a memorial plaza namd the Veterans Memorial Plaza to the Veterans of our Country. It is located in the front plaza at Village Hall, and is a place that residents and non-residents can remember loved ones who have served our country in the nation’s different service branches. In addition to the American flag, flags representing each branch of the military, prisoners of war and soldiers missing in action will be flown.

The memorial is highlighted with a centerpiece eternal flame sculpture, entitled "Eternally Remembered" that will appear to flicker in the night.  The plaza was built to allow engraved bricks to be placed to honor the veterans. Bricks are in line with a corresponding service medallion and flag of each branch, in front of our nation’s flag, all surrounded by walls and landscaping.

On Memorial Day in 2017, the Village of Hanover Park unveiled a special addition to the Memorial Plaza---a new statue of a military working dog. The statue honors all canines that have served in the U.S. armed forces.

The vision for the Veterans Memorial Plaza is a result of the hard work and passion of the Hanover Park Veterans Committee. 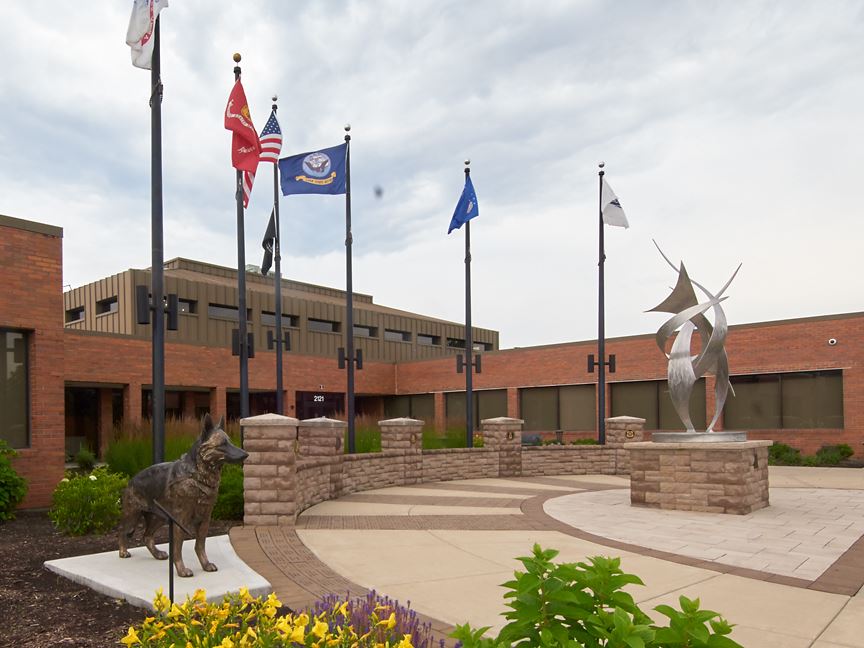 At forefront of the Veterans Memorial Plaza is the "Eternally Remembered" eternal flame sculpture. The stainless steel sculpture is approximately 10 feet in heighth. The Hanover Park Veterans Committee worked with sculptor, Bruce A. Niemi on the conceptual design for the eternal flame that is lit evey night further highlighting the plaza.

The War Dog Sculpture was a welcome addition to the plaza and is a one and half scale replica size German Sherman created and cast by Renee Bemis in South Carolina. The staute sits in a place of prominence within the plaza honoring military working dogs.