Hanover Park is a dynamic community of over 37,000 with a strong business environment, encompassing over 600 businesses from small home-grown operations to large Fortune 500 companies. Their central location in Chicagoland's northwest suburbs and large working population ensure retail expenditures of over $275 million a year. The Village's significant TIF incentives and AA Bond rating make Hanover Park a smart place to do business!

Hanover Park is served by three community colleges, including Elgin Community College, Harper College, and College of DuPage. The colleges offer continuing education programs to assist in the ongoing training of your employees. In addition, renowned Illinois colleges and universities are within commuting distance, including: 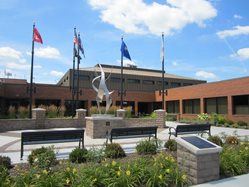 The council-manager form of government was adopted in 1971 in Hanover Park. Council-manager government is the most common form of government that provides for professional management. In the Village of Hanover Park, the President/Mayor and six Trustees, who are elected at large, are responsible for making policy decisions and providing legislative action. The President and Board of Trustees hire a professional manager who has management expertise and problem-solving skills. The Village Manager oversees the day-to-day operations of the Village and its employees.

Council-manager government thus combines the strong political leadership of an elected mayor and council with the strong managerial expertise of a manager.

A home rule unit may exercise any power and perform any function pertaining to its government and affairs including, but not limited to, the power to regulate for the protection of the public health, safety, morals, and welfare; to license; to tax; and to incur debt.